How will the Ukraine war affect Boris Johnson’s re-election hopes?

Can Boris Johnson Save His Skin or Will British Voters Recall His 2021 Antics in 2023?

Remember: A Labour Government would Vote New Taxes to Threaten Wealth of Non-Doms and HNWs

THERE IS AN OLD NOSTRUM, much favoured in the pugilistic world, for a particular boxer who is seen as lucky to have won his bout. He might have swung too wildly, or ducked too slow, but none of that matters now… if he’s been “saved by the bell.”

The shrill notes pierce the tension, the fighters freeze, someone’s last killer blow does not land – and one lucky participant’s title hopes, pride and future earnings are safe – for the time being.

In mid-February Boris Johnson, the British Prime Minister, was the patsy awaiting that knock-out blow from Keir Starmer, recently elected leader of the opposition Labour Party in the UK. And yet the blow never fell.

Boris (as everyone calls him, their remarks laced with either admiration or contempt) had been riding high in the polls and in popular estimation, less than one year before. 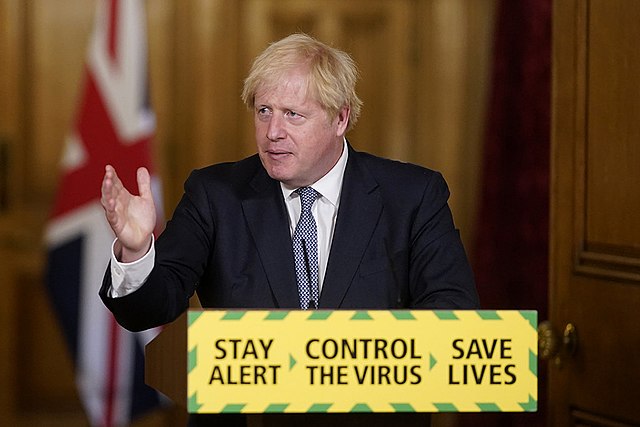 After all, Britain was the world leader in Covid vaccination implementation last February. By Spring 2021, the first millions of the highly vulnerable aged-sector of the population were receiving their Covid booster jabs, while the USA and much of Europe languished in hopeful queues. And Boris’s booster jabs have now proved a success for almost everyone.

So what has happened to change the entire face of British politics in just six short months?

Before Christmas came Boris’s reputational collapse. This was based upon his successive personal failings in Parliament and out of it. Secret parties at No.10 Downing Street, sanctioned by Boris and then protected by a bodyguard of lies, plus other lies, easily disproved… Each week, it seemed, there was a new revelation. The Labour Party could scarcely believe their luck. And they duly soared in the polls. 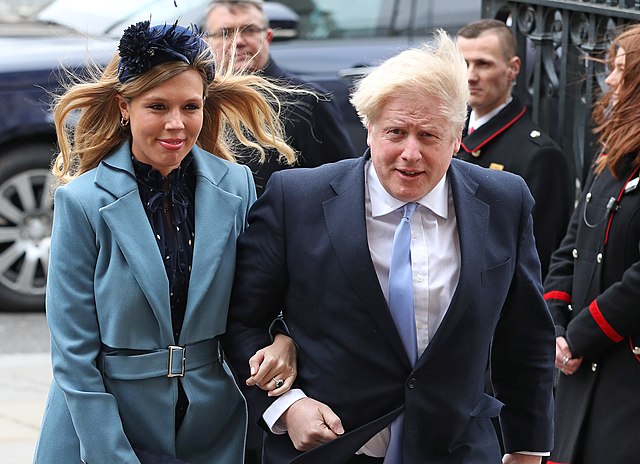 Boris Johnson and his third wife Carrie Symonds. Sources say that Symons threw a ‘victory’ party for her husband after the resignation of infamous adviser Dominic Cummings.

But no-one, other than Mr Putin, knew what lay in store.

THEN, OVERNIGHT, EVERYTHING CHANGED…

The ‘Black Swan’ event of the Russian invasion of Ukraine came swiftly, suddenly, almost out of nowhere, on February 25. It upset every applecart in Central Europe. In a world where nearly everything that we know has changed, how have British politics now changed? What has happened to Johnson’s chances of retaining his job?

For now, of course, everyone has much more to think about than usual. There are serious issues such as help for Ukraine refugees, plus a savage rise in British cost of living. However, one cannot forget the faces of thousands who have openly declared that they will never vote for Boris again. Once people have shown contempt – that strongest of human feelings – they tend to stick to their views. It is worth remembering that the Tories do not just want voters to reject Labour next time – they want them to come back to Boris for more of the same!

But will Boris still be there to gather any votes? Current polls indicate that the Tories will lose thousands of provincial voters in April. This is when the regional/local elections are held across England. These losses will in turn endanger many parliamentary seats when the next national elections are held in 2023 or 2024.

So April will be the time when Boris’s pulling power will be tested. No MP will vote to retain him as Prime Minister if he is no longer seen as an electoral vote winner…

What could Labour’s new rules for the wealthy signify in 2024?

The extreme left-wing threat of a Jeremy Corbyn Labour premiership vanished during the 2019 election that Boris Johnson so convincingly won.  The new leader who emerged is a very different kettle of fish.

Sir Keir Starmer, former Director of Public Prosecutions, is widely respected throughout the legal profession and in the City. Starmer, unsurprisingly, now leads the personal and political polls in Parliament by around four percent. He is every bit the man who could win the next election.

This situation is gradually seeping into the minds of the wealthy throughout the country. They will need, once again, to review their Backup Plans for serious asset, inheritance and tax reactions, knowing the tendencies of the Labour movement as they do.

The wealthy in the UK are basically divided into two separate groups: the Non-Doms and the UK Domiciliaries. The Non-Doms are those who qualify for the ‘Remittance Tax Basis’ system. The Remittance Tax Basis has been in place for well over a century and is the reason that the UK has enjoyed the benefit of having more than its fair share of the world’s wealthiest people.

This tax regime only requires Non-Doms to pay:

Along with paying tax on this basis, the major economic benefits of Non-Doms to the UK have been consumer spending and investment. Accompanying the high levels of spending and investment are VAT, property and other tax revenues. Not to mention the vast array of service industries that cater to their wide range of needs.

So can we predict what the future will hold?

Again, the test will be the next election in 2023. In 2019 Corbyn and his acolytes announced that they would abolish the Remittance tax regime in their first budget. This was followed by clarifications that “billionaires should not exist”. Predictions were made that the super-rich would leave the country immediately! But such moves – when fixed assets, land, long-term investments etc. have to be considered – are not so simple.

Nevertheless, those UK Non-Dom Status individuals who do not already have a proper Backup Plan in place should engage a small team of advisors to map out a flexible, clear Backup Plan that will meet their personal and family needs.

Their team should include their current UK tax advisor(s) who will estimate their future potential tax burden. They will also help to outline the steps that need to be taken in the UK to sever tax residency. The other half of the team would be responsible for identifying a potential new tax home that will meet all the family’s needs and preferences. Included in this work will be the steps, costs and timing to move the family to this new tax home.

Once their Backup Plan is mapped out with its costs and timing AND the future tax burden under a Labour Government calculated, the client can then make an informed decision. They can specifically choose whether or not they want to go ahead and put the elements in place that will give them the ability … and peace of mind…to “leave within minutes” should Labour be poised to form the next UK government.